Ever thought of or experienced extreme ice conditions in which walking was close to impossible? Well, movement and activities during those conditions have been made a lot easier with the Muck Boot Arctic Ice Extreme boot. These boots have an Arctic grip outsole, waterproof exteriors, and can resist temperatures as low as -60 F. The Muck Boots also have Neoprene booties with fleece lining on the insides wrapped in layers of soft rubber so your feet stay warm. There is much to learn abotu these boots, and this Muck Boots Arctic Ice Extreme review will tell you everything you need to know!

The Muck Boot Arctic Ice Extreme protects your feet from water and prevents slipping when moving on ice. It has shock absorption, heat retention properties, and also adjusts to the contours of your feet to prevent chafing during movement. These Muck Boots also come with a multi-directional outsole lug design and makes it easy to move on different terrain. It also has a rear pull loop that helps to put it on and take it off. Here are a few other great features of the Muck Boot Arctic Ice Extreme: 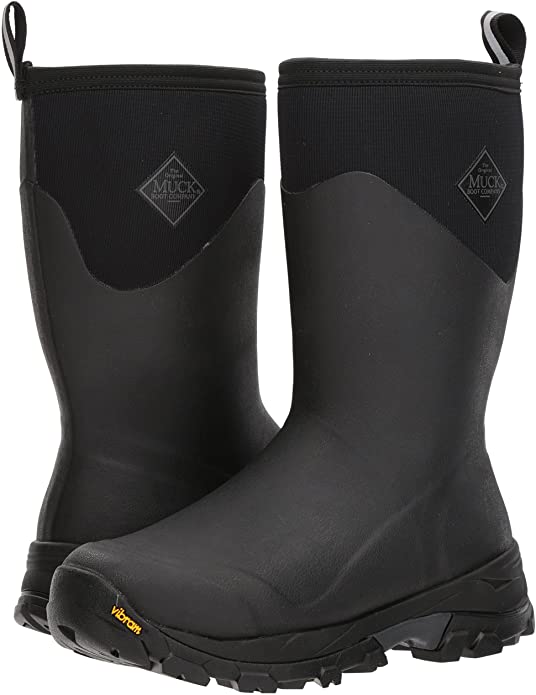 There’s a good chance you’ll spend some time on the ice this winter, whether fishing or just having fun. If this happens, you’ll need a good pair of boots. The Muck Boot Arctic Ice Extreme has top of the line features that distinguish it fromÂ  other winter boots.

One of the best things about this Muck Boot is that it is also a good choice during the rainy season. Rain is an unpleasant thing and nobody would like that mushy feeling of the water soaking up your feet while wearing a pair of shoes. The Muck Boot has waterproof exteriors that help to prevent wetness when walking in a flooded area.

Another wonderful feature of the Muck Boot Arctic Ice Extreme is the ability to adjust itself to your feet irrespective of the shape of your feet. Because of this feature, walking for long distances will not be a problem. The insides of the boot soothe your feet and prevent chafing during long walks.

When walking on muddy grounds, normal shoes tend to collect mud during movement and this can make the shoes heavy thereby making movement difficult. The soles of the Muck boots are designed in such a way that they prevent mud from sticking to the soles during movement.

The Muck boot comes with a rear pull-loop that makes it easy to put on and take off the boot as quickly as possible. With this rear pull-loop, you can take off your muck boot in less than three seconds by pulling close to the base.

The Muck boot has high thermal properties that keep your feet warm and can withstand temperatures of up to -40 F. Because of this, walking during the winter will be a pleasant experience as long as you have these boots on.

If you are the kind of person that rears goats or any other animals that like to scratch, the Muck boots have a high threshold when it comes to friction-induced damage although it is not advisable to scratch them.

One of the peculiar properties of the Muck boot is that it has soles that are designed to cushion the impact gotten from a high drop. If you find yourself in the situation where you have to jump off a platform, jump over a branch, basically anything that has to do with jumping, you will not have to worry too much about the pain from the impact of the jump all thanks to the shock-absorbing soles.

P.S. Looking to stay extra warm out there? Check out ourÂ review of the best ice fishing gloves!

Are Muck Boots good on ice?

It has some of the best traction and grip of any boot due to the combination of it sunique Vibram Arctic Grip rubber and super deep lugs.

How long do muck boots last?

Most users agree that the average pair of Muck Boots will last three to five years. Eventually they will wear out, like any boot will, but they’re a reliable, durable boot.Â

How tall are these boots?

The Arctic Ice Extremes are about 13in tall.Â

Do these boots run true to size?

Because of the added insulation, many users recommend adding a size to your normal boot size.Â