The process of successfully catching a fish can be a tad challenging- from driving out to casting your line and finally pulling up your trophy prize. Not to mention the energy spent on continuously cranking an uncomfortable handle to reel in your line. This Daiwa Tanacom1000 Dendoh Fishing Reel review will explain how it alleviatess many of these challenges.

Repeating this routine overtime, your hands become sore and spent. Also, you lose a lot of meaningful time pulling a deep-sea fish and getting your fishing line back. However, with the right fishing gear, you wouldn’t have to deal with any of these.

Daiwa Tanacom1000 Dendoh Fishing Reel Review – Is It Worth the Money?

Enter Daiwa Tanacom1000 Dendoh Fishing Reel, a fishing aid that makes fishing easier, saves you some muscle strength and time. This fishing aid is designed to ease the struggles of locating the right fishing spots,
trolling at bottom depths, and retrieving your reel lines.

This Daiwa Tanacom1000 Dendoh Fishing Reel review guide will walk you through the features, benefits, uses, and downsides.

Daiwa Tanacom 1000 Dendoh Fishing Reel is the ideal fishing reel that allows you to take your deep drop fishing expedition to another level. It offers unrivaled deep-sea fishing value by its ability to reach deep bottoms in search of deep dwellers. 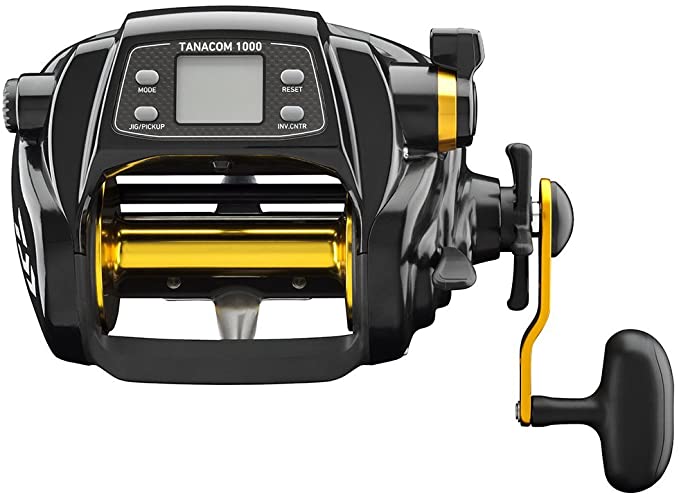 However, the Daiwa Tanacom 1000 is much more compact, ultra-light, cost-effective, and designed with higher advanced features to add to its sleek black finish. It possesses a greater line capacity and is extremely efficient in gauging and recording the depth the reel has reached against future uses.

Thanks to the rich technological innovations this fishing reel possesses, it is incredibly reliable and durable. Made with water, salt crystals, and corrosion-resistant materials, this reel’s sealed electronics can stand extensive use in marine environments!

While Daiwa Tanacom 750 reel can serve for deep-sea fishing, if you’re looking to catch larger fish sizes, Daiwa Tanacom 1000 is your best bet. For an 80lb braid, the 1000 reel model can hold an additional 300yards of weight, compared to the 750 reel model.

Daiwa Tanacom 1000 Dendoh Fishing Reel features an advanced LCD display that reads out in English and makes for easier programming. With a small screen, this digital readout displays highly visible readings about the reel’s depth, fish zone, and the speed at which it is retrieved. It also stores the information it recorded at a spot if you may want to reuse the details.

This model features an automated stop and jigging function to put you in charge of your fishing experience. One that allows you to program your jig length or pause time per jig. Although this auto-function comes with a default setting to stop at 5m, you can reset this distance. The auto-stop feature stops the reel from flying around in the wind.

To guarantee you attain an optimum casting performance, the dendoh fishing reel has an oversize line aperture. It has sufficient lines that make it possible for you to hunt for some modern-day creatures at depths greater than 500fts. It also allows for a clearer view in cases of kite swivels. This oversized line aperture prevents possible knots that are likely to form while you’re casting your line.

Small-sized fishes will accelerate faster while taking up your line. The variable speed lever controls the ascent speed of all fish sizes using the lever. These features make it possible for you to haul up 1 to 3-pound weights of sea creatures. Though with its default setting, it has a retrieval rate of 130m per minute.

The retrieving reel’s motor is designed to automatically shut down at the point where the lever reaches the surface. The manual winding design enables you to crank the handle or the throttle lever to bring in your caught trophy.

Anglers do not have to deal with the constraints of plunging the reel directly to the boat’s battery and restricting its movement. It independently runs on a 12v battery.

Dendoh fishing reel got more than 95% positive rating from its users. They are pleased with its compact design, ultra-lightweight, and ability to perform exceptionally, just like its more expensive cousins.

The Verdict is the Daiwa Dendoh Reel is Versatile and Quality!

Daiwa Dendoh Fishing Reel is lightweight, compact, and budget-friendly. This ideal reel is your best bet to get target deep sinkers without having to spend much energy in reeling up the line.

Unlike most fishing reels in its price range, it exerts the same power and performance as most costlier fishing reel models. Its digital readout displays visible readings in almost all light conditions. It runs independently with its 12v battery. It saves you the stress of cranking handles to reel up your line using its electrical reels.

Without the right fishing gear, catching your targeted fish might seem a handful. Dendoh fishing reel guarantees the best experience for an avid angler. It can also serve for both fresh and saltwater bodies.  Hopefully this Daiwa Tanacom1000 Dendoh Fishing Reel Review was helpful.  See you on the water!

Is there a need to oil and grease my fishing reel?

Yes, but not in large amounts and not every part of your reel. While you can apply tiny drops of oil on your handle bearings, you shouldn’t use it on your internal mechanical components. This will reduce the lubrication of your bearings and gears.

In the same light, apply grease moderately on your reel parts that are likely to experience friction.

How often should I wash my reel?

It would be best if you washed your reel after every usage. Small amounts of salt will stick up to your gear after every fishing tour. Leaving it unwashed for a long time will result in future problems for your reel.

How should I wash this fishing reel?

To wash off the saltwater, non-saline water is your best shot. And while you’re at this, your drag should be sealed to avoid water from penetrating your drag stack. Then lightly sprinkle the freshwater all over your reel using either a spray can or a garden hose.

The reel has probably stored some water. Hold the outfit close to the reel seat and dislodge excess water it has taken in. Do not hit the rod against a hard surface to shake off the water. Gradually loosen the tightened sack and leave it dry under the sun.

Is there any energy source that can power this reel aside from being wired to the boat's power system?